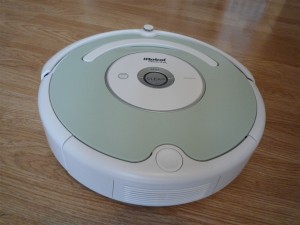 I recently took delivery of an iRobot Roomba 505 robot vacuum cleaner. It’s the most basic model in the range, coming in at 1p shy of £200, which I grant is a lot of money for a vacuum cleaner. Having said that, it’s cheaper than a Dyson.

In the box were the Roomba itself, a mains charger, a spare filter and a brush cleaner. The higher-end models come with a base station, to which the robot will return automatically for charging. Some models also include scheduling, but while I’d have liked that I just couldn’t justify the additional expense.

After a couple of hours’ charging the Roomba, which I have named Wanda, was ready to go. Cleaning the floor is a simple matter of placing the cleaner in the middle of the room, switching it on and pressing the big, glowing ‘Clean’ button in the centre of the device, at which point it plays a few notes and starts to move. I was initially impressed by how quiet it is, although I still needed to turn the TV up a bit. Ordinarily, of course, you’d set the Roomba off when you go out, so this isn’t an issue. As well as the brushes on the underside of the machine, there’s a rotating brush which protrudes from the side and does a good job of cleaning right up to the wall.

Initially, the Roomba moves in an outward spiral but this quickly changes to seemingly random motion. I noted a few spots on the floor and was pleased that the Roomba covered them all at some point. Obstacle avoidance is also very good; as the machine approaches table legs, walls and other fixed objects it slows down and gently bumps against them, ensuring that it cleans right up to them. 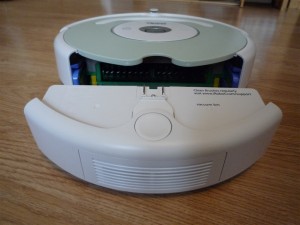 Once the Roomba judges that it has cleaned everywhere it switches itself off, ready for emptying and recharging. The bagless design is good and the bin, although not huge, is large enough (especially as you’ll be vacuuming more often). It’s easily removed and emptied, important in an appliance whose entire purpose is to save labour. Although it takes longer to clean a room than you would, the whole point is that you don’t have to do it at all.

Overall I’m very impressed and pleased with my Roomba and would happily recommend it to anyone, especially those who live in single-floor accommodation since the one place it can’t clean is stairs. The sheer pleasure involved in coming home to a freshly-vacuumed home can’t be overstated.