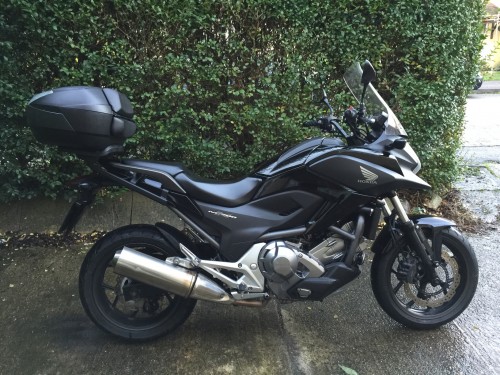 This year I turned fifty. We had a lovely family get-together a few days before the momentous day itself, at which we had a fantastic full-on roast beef with all the trimmings, especially parsnips, my particular favourite. After the meal I was handed a card by my in-laws. On opening it I was stunned to find a note saying that I was to present myself at a motorcycle dealership in Farnham the next day where I would exchange my old bike for a beautiful 2012 Honda NC700X DCT.

Needless to say, I didn’t sleep too well that night courtesy of some serious excitement. In the morning I phoned my insurance company and, after a bit of a faff due to their computer system having gone down (typical!) I arranged to transfer my cover to the new machine. I called the dealership and agreed to be there at 2pm.

Juliet decided to follow me down there with our son, Max, who loves motorcycles and constantly makes ‘broom broom’ noises while pretending to turn a twistgrip. A whole showroom full of bikes was a real delight for him. We soon had all the paperwork completed and, after a visit to the nearby supermarket for supplies and a bite to eat, I was ready to head back home on my new machine.

My first impressions were pretty favourable. The wide bars and tallish seat height made for easy steering and a good view, while the mirrors are, quite honestly, superb. The best bit, though, is the automatic gearbox, a first for me and very uncommon on motorcycles. It took a while for my left hand and foot to stop twitching as I approached roundabouts and wanted to change down, but I soon got used to it. Just cruising along, not having to do a great deal except take in the world around me is glorious. I never want to go back to manual gears. Ever.

The bike’s fuel tank is located under the saddle, with the filler cap under the pillion seat, which hinges upward to reveal it. Where a normal bike’s tank would be is given over to a large, lockable storage area, just about big enough to take a crash helmet and plenty big enough for a lock or two and the bag of bits and bobs I habitually carry around with me.

To say that I’m happy with it would be an understatement. It’s played a large part in renewing and revitalising my interest in motorcycling generally and given me a whole new reason to get up in the morning.